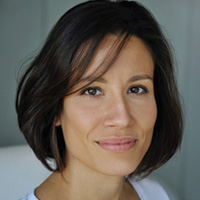 Amanda was mentored by one of Australia's finest casting directors, during which time she worked on a range of both Australian and international film and television including THE DRESSMAKER, RED DOG: TRUE BLUE, Marco Polo (Netflix) and The Code (ABC).

Since branching out on her own, she has cast miniseries On The Ropes (SBS) and Pulse (ABC) - which was celebrated as one of the most diverse ensembles on Australian television, and for which she was peer nominated as a CGA finalist for Best Casting in a Drama / Miniseries. She frequently performs consultancy work on international projects such as Disney's MULAN and HBO's Sharp Objects, and has regularly worked with network NBC on key roles during pilot season.

She has cast a range of genres in film - most recently the comedy drama NEVER TOO LATE (dir. Mark Lamprell) horror BLOODY HELL (dir. Alister Grierson) and tween film BACK OF THE NET (starring Disney's Sofia Wyllie). She is currently casting a 6 part Lingo Pictures' adaptation of Michael Robotham's #1 bestseller 'The Secrets She Keeps'.